Hi my 1985 mt500 Has desert paint underneath the green. Was that standard? I mean could it of seen action?
0 x
Top

MT500 were built ex factory in four colours from memory green ( standard)
Red
White
? You will be able to find out with a little forum search

Northern Ireland bikes weren't green as it was deemed too military looking
Riding Instructors had a different colour so they could be easily picked out
The Sheffield Parks CV 500 white with black forks ?

Vehicles can be painted in theatre to suit conditions, so desert sand was used .

So bikes don't normally see action , whilst MTs may have a gun box, you would only use it as a last resort

I used to train for forward recce , using hard skin armoured cars, main armament 76mm and Browning machine guns. The name of the game was to see but not be seen, as soon as you're seen you're dead ( A Buccaneer attacked me once approaching from behind in a valley coming up flying over my head covering me in jet fumes- he proved the point) . If you were on a bike with zero protection , you'd be dead meat.

That said if you operate in the snow, you paint vehicles white, in the desert - sand , woodland - green. And if you are in a forward area you MUST be in radio contact. Of the hundreds of MTs I've seen being sold off only 4 were FFR- fitted for radio- they were painted white and had military police markings

In short, you can tell the punters in the pub anything you like but you could easily be bubbled
0 x
Top

Hi, i tried to post and PM yesterday, seemingly failed.
I have a pic of an MT 500 in use during the Gulf war in 1991. The file is way too large to post, please PM with an e mail and I will send it over & happily let some other younger IT savvy member shrink/zip file/reduce size & post it for others interests.
cheers
Don
0 x
Top 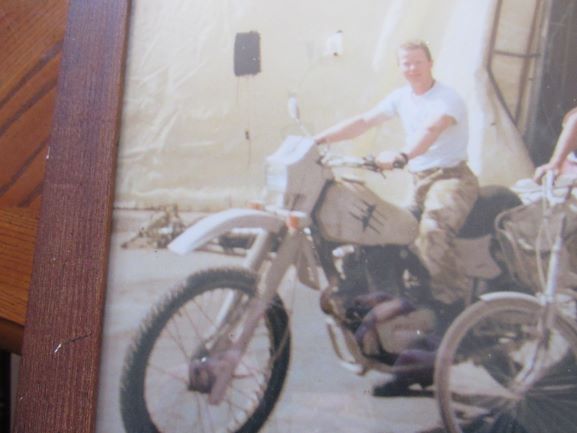 Users browsing this forum: No registered users and 0 guests