A place for current or ex-Can Am owners to natter..
Post Reply
13 posts

Back in the mists of time (1985ish) I took this picture of a Can Am loaned to me by the Queen. Anyone got it now ?
No particular reason - I'm just curious to know. And if it's now yours then the pic would make a good one to add to your bike's history. 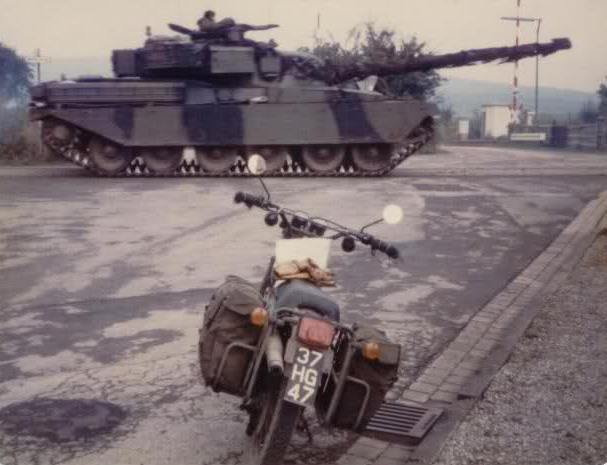 I've got a few other pics from the same ex so if your number is close to the one above there's a small chance I've got it as well.
0 x
Can Am Bombardier
Most of an airhead Beemer
Some CXs
Top

I have just acquired a Can Am and received its history from RLC. My can am was registerd 37 HG 21. Would be interested in any info/photos of this bike. Minehad a sheltered life. It only has 3k on the clock and its condition shows that it has not been used in ernest.
0 x
Top

That's close ! You could always photoshop it

I'll find the other pics and see what there is. A pack of about 18 of us (mostly TA bounty hunters) rode from Grantham to Hanover - the registrations were mostly consecutive so there's a small chance I've got one of yours. This is the only other one I have scanned at the moment - but it's not much use ! 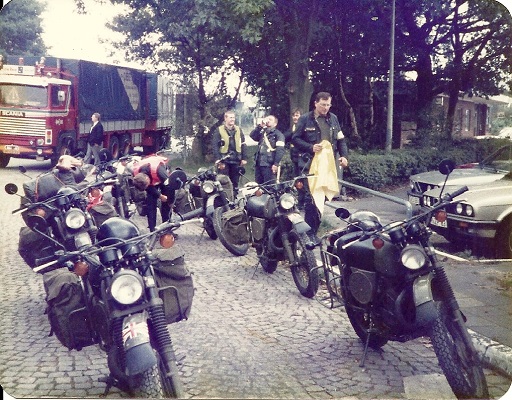 On mileages I don't think I've ever seen one with more than 10k on it - and that's on mine after using it as a daily hack for a couple of years. Usually they're down at the 5 to 6k mark. Usually on ex they'd get shipped in the back of a truck and then just used for tootling around in the woods so they never racked up any miles. I think a lot of people didn't see the point.

Give me a couple of days to dig the pics out - fingers crossed.
Last edited by DonR on Fri Jul 26, 2019 4:43 pm, edited 2 times in total.
1 x
Can Am Bombardier
Most of an airhead Beemer
Some CXs
Top

Thanks. Were the bikes from the same regiment when you rode to Hanover and what was the purpose of the trip.
0 x
Top

Our unit was TA Ambulance Squadron No 264, part of 161 Rgt RCT. A sponsored unit based at Grantham.
Does that tally with the history you've got from the RLC (formed by merging RCT and REME) ?
Who do you write to to get the history it ? (EDIT Coff coff - just found out how. ┬Ż35 - I think not)

The exercise in Germany was Lionheart '84 which was about as big as they got in those days.
Last edited by DonR on Fri Jul 26, 2019 8:47 pm, edited 1 time in total.
0 x
Can Am Bombardier
Most of an airhead Beemer
Some CXs
Top

I am not ex army so at this moment I have not interupted its history. It seems to me that these Can Ams seem to be like many of the current Enfield Bullets. They have lots of owners but really go from heated garage to heated shed and do little miles in between.

Thanks for all your input.

As a postscipt I have flirted with potential ownership of an MT500 but of the 3 I went to look at none of them could be started. My son in Law is ex army and said the the 500s never did any miles because no body to start them and when they did get them going they were horrible to ride. On the flipside I have had 2 MT350s through my hands and I really liked the bikes. They were obviously built to a high specification and not to a price dictated by the "bean counters." I bought both of mine when they were selling for around the 1k mark. Hindsight is a wonderful thing - I should have kept both of them but the Can Am is still my preferred bike.
0 x
Top


I have seen a vehicle at Withams with a very detailed record of servicing, parts fitted etc but I think that had been left in accidentally

I was in TA armour for 8 years. One bike was ridden by a regular who had left us but his unit passed close by so he borrowed a bike just to say hello. I saw other bikes when we were moving in large convoys, for us knowing how to navigate, spot enemy forces and report their movements using a map was our day job so they were pointless. Convoy guides were probably useful to units whose primary role was not knowing where they were on the ground.

One of my MTs was used by an ambulance unit , a popular assignment !

As for consecutive vehicle registrations, we were issued with 20 brand new Fox armoured cars over quite a sort period. I think there were only a few with close registration plates, early ones had flotation screens later vehicles didn't

There are some civilian owners who think that their bike may have been in the front line with the gun box holding something to be used in offensive manner and by implication makes them tough guys.

As for MT500 starting, having had trips with a mix of 350 and 500 owners, the 500 guys who used their bikes a lot could always start them. The guys that struggle seem to be infrequent users- there's a huge thread on here about 500 stsrting techniques From the posts , bikes need to be set up right and technique learnt
0 x
Top

Cheers Wirralman - I won't be bothering with the history. I already know it's army reg 'cos the chap I bought it from (┬Ż200 in 1987) hadn't got round to putting a civvy reg on it. That will have to do.

One of our jobs was convoy control - mainly because it seemed no one else in the unit could read a map. In a transport unit

But then a lot of them were civvy bus drivers

As for tough guys and combat proven bikes - it's amazing how many Can Ams for sale were used in the Falklands. Best one I saw was on ebay (think I've told this story somewhere else on here) where the bike had belonged to the 26th TA Pathfinder Regiment. Eh ??
Apparently you could tell because on the mudguards there was stencilled 'TP 26'


At on T junction ( small access roads) , the lead Ferret turned left and the first REME (TA) vehicle a landrover didn't follow him, taking a variety of trucks and trailers with him. No attempts to stop them via the radio were successful

The escort troop leader, a notably self opinionated Staff Sergeant, eventually managed to overtake and get to the REME land rover and stopped his Saladin in front of it. He dismounted absolutely furious and proceeded to tear a strip off the land rover commander.

It was pitch black at the time the only light being a torch. After berating the vehicle commander for failing to follow the Ferret and not listening to his radio, the SSgt spotted a crown on the REME soldiers uniform. ( for the benefit of other this indicated that he was a Major so many ranks senior to him), map -reading wasn't his forte

Users browsing this forum: No registered users and 1 guest